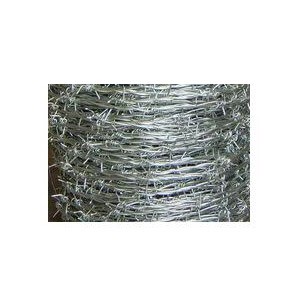 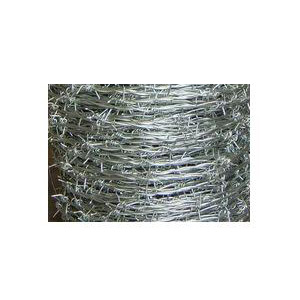 Barbed wire, or barb wire as it is sometimes called comes in a variety of different sizes and coil lengths, depending on the application.

Typically, barbed wire is defined by several criteria, which include the number of strands of wire, the number of points, distance between points and the weight of the reel or coil.

Standard barbed wire then would be 12-1/2 gauge, 4 point, 80 rod with 4" spacing, 85 lbs packed on skids of 27 coils. Reels may be supplied with a wire core for ease of handling, though as a precaution, heavy gloves should be worn when handling barbed wire to prevent personal injury.

Other configurations such as two point or smaller reels are available. In addition, 15-1/2 gauge high tensile wire is also available.

Barbed wire most often is supplied as hot dipped galvanized. The wire is given a molten zinc bath, which serves as a rust preventative. Barbed wire may also be supplies with a PVC coating if desired, though this is not as common as the HDG type.